What's happening at other clubs 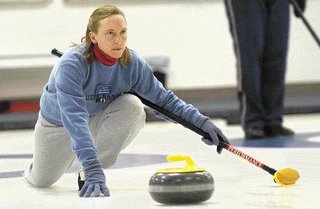 Photo on the right is Judy Gilbert of Montgomery Village curls at the in .

Our thanks to Gazette.net Community Newspaper online for this article

In this obscure — and to most, baffling — game, players are encouraged to throw stones at houses. Just not those kinds of stones, nor those kinds of houses, though the sport of curling can at times require quite a bit of sweeping.

Curling is the sort of seemingly-inane diversion that might normally frustrate a wife to no end.

Thing of it is, like her husband Ron, Judy Gilbert is a curler too. And judging by the casual grace of her efficient lunge and the repeated ‘‘Lovely curl!” accolades she wins from team skip John Bittner on Sunday night at the National Capital Curling Center, she is not at all a shabby one.

It’s been nearly four years since the Gilberts were in , Ron working the Salt Lake City Winter Olympics for an online ticketing agency. The company needed someone to manage the venue in , which happened to be the sole site for curling.

It took a week of watching every day — and the good fortune of Judy happening to sit next to one of Team ’s curlers — for the two-hour matches to start making sense.

But by the end of the two weeks, the Gilberts had caught the bug they would soon bring back with them to , watching as the curling craze caught hold among the small but fervent crowds, earning a cult-like status in only its second Olympics as a medal sport.

Television executives are banking on the same kind of boom for next month’s Olympics in — the Torino Games. Fifteen of 26 curling matches that are being televised will be live.

Like last Olympics, Ron Gilbert will be at the games, with a front-row seat to what could be curling history as the teams vie for what would be the first American curling medal.

And if the stateside buzz so far carried by the women’s team is any indication — a widely enamored press has dubbed them the ‘‘Curl Girls” — Gilbert might be witness to a vastly more significant moment: when the fringe sport curling breaks through to a mainstream audience.

Like a good curler, he isn’t holding his breath. He knows that for the uninitiated spectator, curling can be a lot like watching paint dry.

What isn’t immediately obvious that the uninitiated will miss at first, even second, glance, is the profound nuance that defines the centuries-old game.

‘‘A lot of people compare it to shuffleboard on ice, but it’s actually like a chess match on ice,” he says. ‘‘Not only is there only a lot technique involved, but there’s also a lot of strategy. I love it now that I understand it.”

Explaining it, on the other hand, can be an exercise in the seemingly absurd.

‘‘I can’t say, ‘Well, they’re coming out of the hack and trying to put the rock in the house past the hog line.’”

As he throws his stones with his abrupt lunge Sunday night on the ice at the center, he still bears the imposing physique that served him well in his younger days in the hockey rink.

Though it does take strong, hardy posture, considerable flexibility and unwavering balance to settle into the lunge position without pulling a muscle or slipping a disk, he doesn’t fool himself that curling is going to whip him into shape — ‘‘We’re not great physical specimens,” he says.

The physical demands are not such, however, that a die-hard septuagenarian curler like Olney’s Jane Bittner can’t take part Sunday night despite her two artificial knees. No, all she needs is her ‘‘geezer stick,” she jokes, a pole that fastens onto the stone’s handle which she uses to push the rock without all the fuss.

Curlers are used to the befuddled disbelief that any sport that involves sliding a 42-pound polished granite rock down a sheet of ice could in any way be legit.

After 20 years, Ken Wray of isn’t one bit shy about owning up to his curling habit.

‘‘Everybody at the office knows that I’m a curler,” he says. ‘‘They look at me quizzically, like, ‘Curler? What’s a curler? Oh yeah, that’s where you slide the rock down the ice.’ And of course, they rip me for it.”

Jerry Kelley of took more of a wait-and-see attitude when he came into the sport in 2004.

He remembers his first few throws sliding off course as he struggled to balance his weight on one slick Teflon-soled shoe.

But the touch came around after five or six games, and soon came the angles, he said — being able to clearly visualize the caroms needed to nudge an opponent’s stone with just the right weight in just the right direction.

Now he has a sense almost of being a sort of ambassador for the sport, he said, a feeling not uncommon among curlers.

‘‘You get the feeling that you’re part of a more exclusive club. Curling is a little bit different, so it’s got that bit of a mystery to it.”

The Potomac Curling Club hopes that mystery will be blown wide open next month, the winter games sparking a surge of interest as they did four years ago.

The club, which has been drawing northern transplants and home-grown curlers to its membership since 1961, boasts some 200 members, with curling available every night of the week for as far down as 8-year-olds.

Through the several ‘‘bonspiels,” or tournaments, the club throws throughout the October-through-April season — even traveling to take on clubs on the Eastern Shore, in Philadelphia and in New Jersey — the club is nurturing that one-of-a-kind curling ethic, which invariably involves a smile, a shake of the hand, the promise of a few rounds of owed beers, and as always, a ‘‘Good curl.”