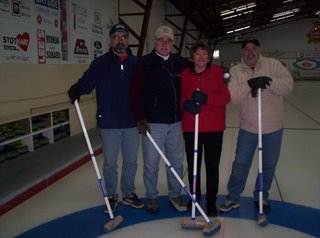 The above photo is team Napa Pro who defeated team Broken Brooms.
In other play saw a super game between Up River and the Smelter Dragons. Up River was on the winning side. The Legion Warriors won, by default, their game over Brunswick Ground Control. The Duners were victorious against The Rolling Stones. Teams Lounsbury Hot Chevys and the City of Bathurst was postpone to a later date.
The Standings have been posted by Wayne Aubie and an update will be included in next week's Thursday report.
Good game all!
Posted by Bathurst at 6:53 PM